By Catherine Arthur, Lecturer in Peace and Conflict Studies in the Humanitarian and conflict Response Institute (HCRI) at the University of Manchester

Local peacebuilding practices involving civil society are often perceived to be just that – civil, respectful, and lawful, often involving benevolent external partners to work at a grassroots level to assist in the transition of a state of conflict to peace. However, this popular concept of more formalised local peacebuilding excludes the informal, individual attempts to contribute to wider social discussions of peace, including street art and graffiti. This is perhaps due to its perceived illicit nature: graffiti and street art are often unauthorised, sometimes illegal, and are widely understood to be an act of defiance and disrespect to public authorities. Yet this medium provides us with a unique window into grassroots peace initiatives when examined in post-conflict societies, where it can be used as a tool to promote messages of peace, and engage former ‘enemies’ in creative practices that foster greater inter-group contact (and therefore trust) and communication (Vogel et al. 2020). If we look at examples from transitional societies such as Timor-Leste and Northern Ireland, we begin to see how street art has been effectively used to foster peace, enabling individuals to engage in activism for positive social impact at a local level. If street art is considered more seriously as a cultural product of its political climate and a tool for positive social change, then we begin to broaden our knowledge of local peacebuilding practices and gain deeper insight into all available tools for peace.

Creative approaches to peacebuilding at a local level (rather than the more traditional, top-down approach of international peacebuilders such as the United Nations) have gained more attention in recent years (Ryan 2013; Mac Ginty 2014). Such creative practices at this local level have become more diverse to include artistic and more expressive initiatives such as theatre, music, dance and arts (for example, see Kim, Kollontai and Yore 2016; Premaratna and Bleiker 2016). One such artistic practice is graffiti, which is increasingly gaining in popularity though simultaneously struggling to shirk associations of criminality, vandalism, and dissent. It is becoming popular as a peacebuilding activity because it is quick, relatively cheap to do, and thus accessible to a wider portion of the population. Graffiti can bring colour and brightness to urban landscapes that have endured particularly dark periods of conflict and turmoil.

Street art can also be a powerful communicative tool and a source of empowerment for minority and disenfranchised individuals, enabling them to engage directly in activism in their communities. This form of ‘DIY politics’ (Main 2014: 8) offers an opportunity to engage in public discourses and conversations about peacebuilding and the way in which their society is being rebuilt. Varying slightly in their styles, specific messages and political contexts, we can see that graffiti is popular and contributes to peacebuilding in a unique way in the following post-conflict case studies: Timor-Leste and Northern Ireland.

The nature of graffiti is often influenced by the historical 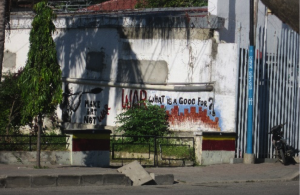 and political context in which it occurs as they try to deal with a traumatic past. Commemorative pieces that memorialise victims, heroes, or martyrs constitute one way in which street art affords individuals a share in writing the history of the violence, albeit in an informal manner. Twenty years have passed since the end of the violent Indonesian occupation of Timor-Leste but the struggle for independence and its leaders are still painted in the streets of the capital, Dili.

By celebrating the liberation struggle, artists are able to engage in national memorialisation of this difficult part of their history (Arthur 2016). Most recently, this has involved a mural of fallen veterans of the Falintil guerrilla army that led the liberation struggle, painted in time to celebrate Falintil Day on 20th August this year (Arte Moris 2020). This particular example demonstrates how memorialisation in peacebuilding contexts can be participatory and creative, and that a society recovering from conflict can do so in peaceful ways.

Graffiti and street art are also used more explicitly in connection with peacebuilding in Timor-Leste. The majority of pieces in Dili project messages of hope, peace, love, and national unity in a positive call for this society to move forwards and build a better, more stable and peaceful future. This form of arts activism directly tackles internal problems and divisions of politics to informally contribute to the peacebuilding initiatives that are ongoing in East Timorese society. Crucially, it has been during periods of instability and violence in the post-independence years (common to post-conflict, transitional societies) that the biggest street art projects have emerged. Some of the greatest challenges to peacebuilding, connected to political instabilities, occurred in 2006 and 2012. Each time, a wave of graffiti swept the capital in government-endorsed projects that made visual and rhetorical reference to the importance of peacebuilding (Arthur forthcoming 2021). The fact that this public art is not criminalised but, at times, actively supported by the government suggests that the state recognises there is value in this form of expression for the wider community and as a practice of peace.

Northern Ireland is famous across the world for its muralist tradition; neighbourhoods and streets are marked as either Unionist or Nationalist, Protestant or Catholic, by the symbols and figures painted on gable walls. Many of Northern Ireland’s murals are commemorative in nature, memorialising the respective communities’ histories; others depict paramilitary organisations and masked figures, carrying weapons and issuing implicit threats of violence. Consequently, it is hardly surprising that this particular tradition challenges peacebuilding at a local level; the messages they communicate are hostile and often seek to uphold the sectarian, ethnic divisions, rather than promote reconciliation and peaceful cohabitation (see McKeown and Taylor 2017).

Yet in recent years, there has been a change in the style and content of murals by some artists seeking to transform the social impact of murals from inherently divisive pieces of art. A small group of graffiti artists in Derry-Londonderry, Urban Vizual Arts, have gained popular attention for their work that bucks the trend of gable walls being canvases for militaristic and sectarian content. The group aims to use graffiti as a tool for education and positive social change, taking back the walls and shifting negative associations of the art form so that it can be used for peace (Thomas 2019). Their most famous mural was the 2019 depiction of the characters from the Channel 4 comedy, Derry Girls, set in the city in the 1990s. The decision to paint figures from popular cultural in a mural style is significant; it presents a clear divergence from typically militaristic and political mural painting in Northern Ireland.

As the most watched series in Northern Ireland in 2018 (ibid), Derry Girls was enjoyed by members of both the Unionist-Protestant and Nationalist-Catholic communities, and UV Arts’ decision to paint this particular mural is reflective of their desire to promote cross-community engagement and positive dialogue. This attempt to cross social divides through pop culture and graffiti suggests that arts activism for peace is taking place; it seeks to depoliticise public art, distance muralism from sectarianism, and focus on localised peacebuilding in a light-hearted way. The popularity of the Derry Girls mural within and outside the city suggests that this strategy has struck a chord with people who are ready to see more positive, fun images on their walls. Thus, it appears that UV Arts are perhaps beginning to transform the previously militarised urban landscape in Northern Ireland and with it, social attitudes. As Bill Rolston asserts, murals are ‘an integral part of the everyday political scene […] Sometimes the murals merely reflect the fears and hopes of the community, at others they actually help reproduce the political climate, whether progressive or reactionary. They are not just a backdrop to politics, but a dynamic part of the political process’ (2003: 14). In this way, we can see how murals and public art can be both impactful for communities, and reflective of the attitudes within them. If the content of murals in Northern Ireland continues in this depoliticised trend, and the pattern extends across the province, then this form of public art could provide real insight into attitudes towards peacebuilding in this post-conflict society. There is evidence to suggest that this shift away from sectarian politics and towards issues that transcend community divisions is continuing. During the COVID19 pandemic, the mural was updated to display the characters wearing protective facemasks, in an attempt to persuade locals to do the same (O’Connor 2020). This change was accompanied by other murals thanking and celebrating medical and care staff in the NHS for their efforts during the health crisis, a sentiment that has been echoed by both communities.

Timor-Leste and Northern Ireland are but two examples of post-conflict societies that have a vibrant street art scene that is actively engaged in peacebuilding discourses. Graffiti in Colombia (Rolston and Ospina 2017), Cyprus (Vogel et al. 2020), Chile (Peñailillo 2013), and many other former sites of political tension and violence offers researchers a rich source of invaluable socio-political data, and practitioners an alternative medium through which they can engage with and foster new narratives of peace at a local level.