‘Peace on Facebook’ remains elusive, but ‘post-conflict generation’ are being heard on social media

Moral panic discourses about the harmful impact of social media ‘echo chambers’ have become increasingly prevalent over the past decade. It has often been presumed that platforms such as Facebook and Twitter contribute to political polarisation by bringing together like-minded individuals and limiting exposure to opposing views. While there has certainly been some evidence to suggest that people click on social media stories that are congruent with their world views, the ‘echo chamber’ effect does appear to be exaggerated. Indeed, research indicates citizens are increasingly exposed to news and information on social media, whether accidentally or incidentally. Axel Bruns goes as far as to suggest that online platforms are “engines of context collapse” that expose their predominantly apolitical users to views that they might find undesirable. Elizabeth Dubois and Grant Blank argue that those with diverse media diets and an interest in politics were less likely to find themselves in echo chambers due to their constant exposure to alternative viewpoints.

Might online platforms facilitate intergroup contact in ethnically-divided societies where shared spaces are in short supply? Social media companies like Facebook certainly want us to think so. Peace on Facebook, created in partnership with Stanford University’s Peace Innovation Lab in October 2009, made various claims about how the social networking site was bringing together social groups divided along ethnic or sectarian lines. The project claimed to have facilitated ‘friendships’ between individuals drawn from a range of antagonistic groups, including, most notably, Israelis and Palestinians. However, they were evasive when challenged to provide substantive evidence of these ‘friendships’. Nicholas John characterised the initiative as a PR exercise designed to convince users that Facebook was a ‘force for world peace’ while providing scant evidence to corroborate these claims of ‘cross-conflict friending.’ This is arguably yet another example of the ‘technological solutionism’ that has become synonymous with Silicon Valley, which revolves around the internet’s supposed ability to ‘fix’ societal problems and bring citizens together.

Like the echo chamber thesis, there has been scant evidence to show that peacebuilding is enhanced via unstructured, unsupervised contact on social media. Conversely, there are plenty of examples to corroborate Siva Vaidhyanathan’s assertion that these platforms ‘energises hatred and bigotry’. Twitter has constantly been used over the past decade to share hate speech and spread violence in Israel-Palestine. In July 2014, Anti-Muslim riots in Myanmar were attributed to an unsubstantiated rumour spread on Facebook claiming that the owner of a Muslim tea shop had raped a Buddhist employee. Vigilante violence against Christians, Dalits and Muslims in India since 2014 has regularly been attributed to inflammatory disinformation and misinformation circulating on WhatsApp.

My forthcoming book Digital Contention in a Divided Society explores whether social media bridges sectarian divides in ‘post-conflict’ Northern Ireland. My research focussed on how Facebook, Twitter, and YouTube were used during public demonstrations between 2011 and 2016, such as the Ardoyne parade dispute and the union flag protests; these contentious parades and protests illustrated the ‘ethnic poker’ that continues to divide Catholic and Protestant communities within the highly segregated ‘post-conflict’ society. Whether accidental or intentional, public Facebook pages, Twitter hashtags, and YouTube videos exposed members of the two main communities to oppositional viewpoints on issues such as parading rights. Exchanges between critics and supporters of the flag protest movement were typically antagonistic in nature. The negative stereotyping of loyalists as ‘inbred sectarian bigots’ directly contradicted one of the key tenets of the reconciliation framework articulated by Brandon Hamber and Gráinne Kelly, namely that individuals treat each other as human beings rather than anonymous members of an outgroup. Although this activity was attributed to a relatively small group of digital citizens, the extended/indirect contact hypothesis suggested that any antagonistic interactions on social media were likely to increase prejudice towards outgroups among their respective social networks. 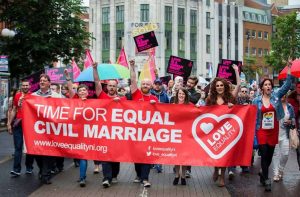 However, platforms such as Facebook and Twitter have been increasingly prominent in campaigns for progressive social and political change in the ‘post-conflict’ society which transcend ethno-sectarian boundaries. Love Equality NI used Twitter to mobilise opposition against the DUP’s use of the Petition of Concern mechanism to block the introduction of equal civil marriage on five occasions between 2012 and 2015. There was also much social media activism focused on extending reproductive rights available elsewhere in the UK to Northern Irish women. For example, Now for NI used Facebook, Twitter and a website to highlight the plight of women who were forced to travel to England, Scotland or Wales in order to gain access to the abortion services legally prohibited in Northern Ireland. Abortion would eventually be decriminalised in the region in October 2019.

Unstructured intergroup contact on social media is unlikely to address issues such as parading rights which continue to polarise opinion in divided societies such as Northern Ireland. Put simply, the technological solutionism associated with Peace on Facebook is an insufficient remedy for the legacies of conflict. Nevertheless, online platforms may contribute to more durable peace settlements by enabling younger citizens to mobilise in policy areas which transcend the tribal politics of the violent past.