Art in Peacebuilding: the Tree of Life in Mozambique

Art in Peacebuilding: the Tree of Life in Mozambique

AfricaFocus (2005) states that “the Tree of Life” is a three-meter-high sculpture created and completed by four Mozambican artists. The statue is made entirely from weapons captured after the Mozambique Civil War. The guns were collected by an innovative project called “Transforming Weapons into Tools”, which encourages people to exchange old weapons for equipment such as sewing machines, bicycles and building materials. Over the past nine years, the project, which employed several former child soldiers, has collected over 600,000 weapons, shredded them and then used them to make artwork. They saw it as a way of using their art to promote peace.

The two critical points of this project are reconciliation with a contested past and history as well as working to develop and create a new future. In this project, the people in charge seek help from former child soldiers. The active involvement and collaboration of former child soldiers in this initiative provides an excellent opportunity to express remorse and take responsibility for the actions of active or forced violence during the civil war in the past. Furthermore, by handing in old weapons to obtain tools for life such as farming tools, this form of activity encourages people to step out of the gloom of war and to participate in the process of building peace instead, using their own hands to start a new life.

Secondly, Nagda and Zúñiga (2003) proposed the importance of listening to others in dialogue participation. Good listening of the project leaders enables participants to be more receptive and facilitates smooth communication between disagreements. Meanwhile, this project gave people a platform to speak out and restore their dignity, especially to former child soldiers and women subjected to sexual violence during the civil war. They controlled their emotions and calmly recounted their own personal experiences as a farewell to the miserable past and a declaration of fighting for a peaceful future. All in all, each of the participants in the project managed their negative emotions well during the event and tried to use the power of peace to better express their desire for peacebuilding.

Finally, through art, it helps all parties to see themselves in a new light, which is a refutation of the theory of evil human nature(Zhang 2013). The mistakes a person makes at a specific time are not indicative of that person’s humanity. Former child soldiers, for example, were involved in violence during the civil war. Most were forced to participate under the threat of death. They should not be easily defined as bad people because of a fixed mindset but should be seen holistically. This shift in thinking also provides new ways of thinking about changing and dealing with intractable interpersonal and community conflicts after the civil war. In short, the success of “the Tree of Life” project is also an excellent example. The British Museum (ca. 2005) points out that the project ‘The Tree of Life’ was born out of a near partnership between Christian Aid, the British Museum, the Christian Council of Mozambique, and four artists working on the project TAE (Transforming Arms into Tools). This shows that out of love and desire for peace, people of different religions, ethnicities, and regions have come together to plan and carry out this project, “the Tree of Life”, which uses works of art to promote peacebuilding. Moreover, through the medium of art, people have the opportunity to engage constructively in a relationship between conflict and cooperation by working with people they do not know or necessarily agree with, discussing issues of common concern and working out appropriate solutions. This greatly contributes to the development and advancement of peace processes. 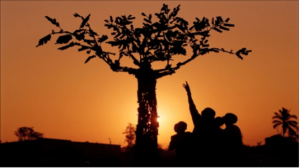 “The Tree of Life” project has unique successful points. First, the project adopted the method of exchanging old weapons for household utensils to collect firearms and shells. This approach brought material support for residents to rebuild their new lives and reduced the possibility of second unrest in the local area. In addition, it provided raw materials for this extraordinary sculpture. As one of the poorest countries in the world, the extreme poverty of Mozambique poses challenges to social stability and may encourage local crimes. In other words, as long as the gun is still available, it is possible to hold it in the wrong hand and cause more death and suffering. However, the handing in and dismantling of weapons reduce the potential danger of war at its source. Meanwhile, the exchange of weapons also was helpful for Mozambicans to start their new life by their new utensils Therefore, this approach has practical significance. Secondly, the ultimate expression of the project is very novel. Dismember the lethal weapons and reassemble them into a tree-like artwork with the meaning of hope and rebirth. This design is unique and highly innovative. Specifically, this sculpture realises the “waste” utilisation, and makes it have richer practical significance that the fact of war and conflict cannot disappear, but it can be solved in a peaceful way. The tree has the symbolic meaning of “rebirth” and will become a new hope for the people of Mozambique to rebuild a new life. In addition, this creative work can also attract a variety of different audiences during the exhibition. More and more people can learn about Mozambique’s once dark past and voluntarily join the peacebuilding team.

This peacebuilding project still has some shortcomings. First, the local government of Mozambique has not made a good example. With the intervention and help of the United Nations, a peace agreement was signed between the two struggling regimes. However, to not be condemned by humanitarian supporters, neither side admitted that child soldiers were used in the civil war. This prevented child soldiers from participating in the demobilisation of regular soldiers and from being compensated with the appropriate allowances. This is also an inevitable limitation when the project jointly initiated by civil organisations and alliances of other countries is applied locally. Furthermore, the project has mainly provided material support to the population, but professional post-war psychological support has been somewhat lacking, especially for children. In conclusion, the positive effects of the Tree of Peace project far outweigh the negative ones, so it can still be used as an effective example of a peacebuilding project for future generations to learn from.

* All views expressed in this blog post are the ones of the author, not CFOM’s or the Hub’s.