Ingoma Nshya and its Endeavour For Peace by Maya El Eid, MA International Public and Political Communication, JNL61004 Communication in Peacebuilding, University of Sheffield. Music has always been seen as having the potential to facilitate cross-cultural communication, understanding, reconciliation and healing. It is also in this way that it has been used in Rwanda to encourage the population to overcome feelings of resentment brought about by the Rwandan genocide of 1994. In 2004, Odile Gakire Katese “Kiki” founded the first all-women drummers’ group, Ingoma Nshya [1]. Although the group made history, its initial purpose is to unite ordinary women affected by the Rwandan civil war and to encourage them to build their future [2]. Not only were these women breaking into a male only activity, they are also made up of both Hutu and Tutsi women. However, as Ingoma Nshya’s website states “we never came together as Tutsi and Hutu. We came as women” [3]. These women are being united through their music and their mutual struggles. There is no exclusion on the basis of ethnicity; at Ingoma Nshya they promote the common vision of peace and unity. The interpretation of this image alone endorses peace for all Rwandans. 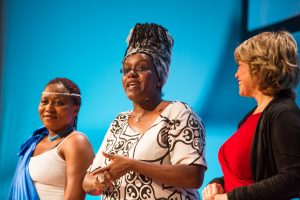 This all-women drumming group have used music and drumming to overcome the differences that were repeatedly highlighted during the Rwandan civil war and have used it as a peacebuilding initiative. As Olivier Urbain mentions in his study of music’s role in peacebuilding, Overcoming Challenges To Music’s Role In Peacebuilding, music has the ability to reconcile an already damaged society. The music and drumming performed by the women of Ingoma Nshya is the pure call for unison between the people of Rwanda. This project reveals its support of peace by recruiting women without distinguishing and discriminating between them. The creator of this program, Odile Gakire Katese, states on their website, Women Cultural Centre, “we had kids of perpetrators, we had widows, we had orphans, but this was not relevant on the stage.” Having both Hutu and Tutsi women that survived the genocide, drum together promotes the message of reconciliation. The Women Cultural Centre website mentions that post Rwandan civil war, “many Rwandan men were either dead, or in prison,” indicating that the population majorly consisted of women. The women of Ingoma Nshya, the survivors of the genocide, set the example on how Rwandans should properly and effectively conduct themselves in a post-civil war society. Julie Botticello identifies in her article, Sweet Dreams And Happy Endings: Women’s Development Entrepreneurship In Rwanda, that these women do not exhibit any behaviour of exclusion; instead they are aware of their differences while acknowledging every member’s grief and pain from the war. She recognizes that the women do not hide their suffering, but they consciously overlook the division between them that caused the genocide. This understanding between the women signifies that they manage their emotions in order to empower their objective of achieving unity and civil peace within their community. Their acceptance of each other goes to show that not one Rwandan was exempt from the war. They were all affected by their shared history. 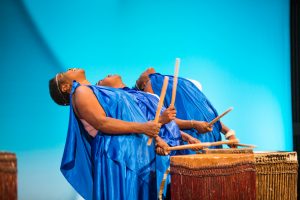 Ingoma Nshya’s use of drumming allowed them to appeal to the Rwandan people through their culture and traditions. Julie Botticello mentions in her article “women in Rwanda, historically, do not drum.” Ingoma Nshya is actively breaking down the cultural and societal norms by having women drummers and through this impressive feat; they are promoting the beliefs of evolution and change throughout their community. It was expected of the women of Rwanda to shatter the expected gender roles as the aftermath from the genocide forced them to become the breadwinners of their families [3]. Odile Gakire Katese believes that with drumming and other forms of cultural and traditional activities will reignite a sense of unity in Rwandan society [4]. With a peacebuilding project that garnered this much attention comes responsibility. Ingoma Nshya celebrates unity, their performances undeniably challenges societal norms and encourages civil peace. However, active engagement with their society will undoubtedly improve their community. Challenging cultural norms has the possibility to bring forth institutional change for the betterment of society. The encouragement of civil engagement by a popular and progressive peacebuilding project will reinforce members of the community to participate and improve their lives. In an interview by Tom Tom Mag in 2018, Odile Gakire Katese states that their goal is to “make Ingoma Nshya sustainable” [5]. Breaking social norms is deserving of extreme admiration and appreciation; however, these women are ordinary women, they have the burden of needing income to effectively sustain themselves. Ingoma Nshya encourages their members to work together for the betterment of their community and each member’s position in society. Julie Botticello mentions that ten women from the drumming group were chosen to work and manage the ice-cream shop. Although it proved to be a challenge as the workers depended on the success of the shop to better their livelihood, the reality of these women overcoming their struggle and taking control of their future is rewarding. Ingoma Nshya has successfully enhanced the path for peaceful cooperation in Rwandan society. The all-women drumming group has managed to successfully engage with a post-civil war society and encouraged beliefs of progression within their community. They succeeded in tackling taboos in their society, such as challenging gender norms, which strengthened their message of social change. Ingoma Nshya awards the rest of their community with an exemplary mode of conduct. The unity and diversity represented is paramount to civil peace. As Corentin Bainier writes in his article “these women spread a message of hope, as they are the living proof that a country can build itself back up after a devastating conflict” [6].   References: [1] Urbain, O., (2019). Overcoming Challenges To Music’s Role In Peacebuilding. Peace Review, 31(3): 332-340. [2] Botticello, J., (2017). Sweet Dreams And Happy Endings: Women’s Development Entrepreneurship In Rwanda. Food And Foodways, 25(4): 344-349. [3] Woman Cultural Centre, [no date]. Ingoma Nshya The Women Drummers Of Rwanda. The Woman Cultural Centre. Available from: https://www.womanculturalcentre.com/ingoma-nshya-the-women-drummers.html [4] Horn, M. (2009). Interview With Arts Director Odile Gakire Katese. Peace Review, 21(3): 363-366. [5] Guthmann, L., (2018). Feminist Kiki Katese Is Revamping Traditional Drumming In Rwanda. Tom Tom Mag (33). Available from: https://tomtommag.com/2018/09/kiki_katese_issue33/ [6] Bainier, C., (2013). Rwandan Women Drum Up Hope In The Great Lakes Region. The Observers France 24. Available from: https://observers.france24.com/en/20131230-rwanda-women-drummers-ingoma-nshya   Copyright Featured image: A member of Ingoma Nshya. TEDWomen 2013, SF Jazz Center, San Francisco, CA, December 5, 2013. Photo: Kristoffer Heacox; at: https://www.flickr.com/photos/tedconference/11247091286/ Illustrative image 1: https://www.flickr.com/photos/tedconference/11247145813/
Illustrative image  2: https://www.flickr.com/photos/tedconference/11247147393/
* All views expressed in this blog post are the ones of the author, not CFOM’s or the Hub’s.