Young People Choreographing the Steps Toward a Peaceful, Sustainable Future

Young People Choreographing the Steps Toward a Peaceful, Sustainable Future

Today’s generation of young people are and will be disproportionally impacted by climate change and conflicts that may result from rising sea levels, reduced access to water, and conflict related migration. Likewise, around the world young people are leading and participating in activism in support of peace and climate action. This includes both explicit political movements and more informal activities that contribute to everyday understanding and practice of politics. In particular, in recent years, it is notable that young people have successfully advocated for the introduction of the Youth, Peace and Security (YPS) Agenda at the United Nations, and the youth-led School Strike for Climate movement has ignited interest and continues to inspire young people’s action to address the climate crisis.

We situate this range of activities undertaken by youth as contributing to positive peace. In contrast to pursuing a narrow focus on negative peace—the absence of war or violent conflict, in locating ourselves conceptually in a positive peace framework, we declare an interest in peacebuilding efforts that are sustainable, incorporate social justice, and include not just formal political action, but also bottom-up efforts to change cultural norms and in doing so reduce violence in all forms. Young people’s informal or everyday political actions in this space are essential to addressing climate change and building sustainable peace, and a number of these efforts incorporate dance as a key tool. 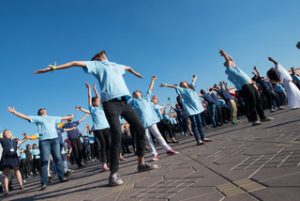 Across a range of contexts, dance can offer a way of communicating frustration, fear and awe for the magnitude of nature. As lack of awareness around climate change and conflict have frustrated advocates wishing to address them, many see dance as a useful way to connect with emotions central to addressing these issues and ideally to eventually embody the transformations needed to combat climate change as we pursue sustainable peace. Increasingly, efforts are being made to link scientific facts with effective means of motivating people to act or to change behaviour. Hence, artists, scientists, and young people are forging collaborations in which they can draw on the emotional, expressive and creative powers of the arts as an alternative way of expressing and amplifying the urgency of climate change.

In our research, we’ve documented key roles dance can and does play in these global efforts.  In particular, dance continues to play an increasingly visible role in the body politic, with choreographers, scientists, educators and citizens using dance in their advocacy and activism for peace and addressing climate change. For example, consider the songs and dances of Xiuhtezcatl Martinez, an indigenous hip hop artist and youth director of Earth Guardians, who advocates for action on climate change through a social justice framework. Similarly, in Burundi, the dance video “A Different Way”, a collaboration between AZ Dance and Burundian artists, raised money for an organisation that runs youth climate change activities, embodying the stories of climate change and the impacts on cultural heritage and diversity.

As we explore in our book Dancing Through the Dissonance (Manchester University Press), dance can provide an avenue of political dialogue and an embodied way to understand and enact social and political change. In our research, we consider the work of a youth-focused NGO and its participants deploying dance for peacebuilding through case studies across three contexts—Colombia, the Philippines, and the United States. We explore how dance, as an aesthetic, embodied medium, can embrace emotions, support relationships across difference and supplement and sustain verbal linguistic forms of dialogue.

In working with young people, we learned that dance can help facilitate embodied empathy, supporting communication, connection and understanding across difference, and across diverse local and global actors and contexts. By listening to young people as peer leaders, we learned how these young peacebuilders emphasise the need for creativity and for new ways of expression and the opportunity for diverse means of sharing their voices, and paying attention to local contexts. 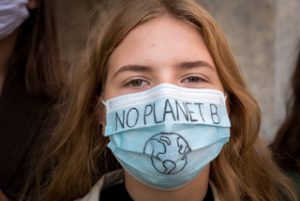 These findings on possibilities dance can offer are confirmed by recent and current initiatives for peace and environmental sustainability. In 2020, despite the challenges of COVID-19, around the world young people kept the movement growing, including through dance. For example, in Germany, young people created a virtual group dance as part of the Fridays for Future movement. And in Russia, young people supporting the Fridays for Future movement and Greenpeace adapted their advocacy in light of prohibitions on large protests to find alternate ways to gather together and perform dances in support of a liveable climate. Likewise, in the USA in June 2021, Spectrum Dance Theater is holding the Race & Climate Change Festival with a focus on social justice and youth. Meanwhile, the Australian Dance Party is leading an arts and community government program Move to Zero, to advocate for a carbon neutral future while also focusing on engaging young people through their show Escape from Plastika.

Climate change poses risks of destruction, disruption and conflict, thus posing real challenges to peacebuilding efforts. Responding to these challenges will require collaboration, innovation, creativity, and diverse ways of communicating and embodying ideas. As seen in our research, the role of young people as leaders and activists can play as a central role. As we have learned from listening to and dancing with them, in choreographing and learning new dances and working with different partners, sometimes there are slips and stumbles, but through practicing, pivoting, and reflecting we can build connections and confidence while finding new ways of moving forward together.

The featured image is copyright: saDanny