About this time five years ago, our colleague Jessica Berns and I wrote an article published in The Diplomatic Courier reflecting on what we termed “the great American divide.” We expressed profound sadness and frustration at the growing violence the United States had witnessed at that time and the injustices that preceded and accompanied it. We, as did many others, felt compelled to do something which, among other things, was to make our voices heard in the form of a short article where we offered lessons we had learned over our years of doing peacebuilding work in West Africa and beyond. Specifically, we invited readers to (1) invest in building relationships of trust; (2) create opportunities for inclusive dialogue; and (3) take action. We encouraged our readers and ourselves to try to put these behaviors into practice broadly, and in particular, in the United States.

As a communication scholar, a researcher of political violence prevention, an engaged scholar who has convened local citizens to collaborate on peacebuilding initiatives in West Africa, and as someone who tries to be an engaged, active citizen in a democracy she cherishes, I have indeed felt deep sadness and frustration over these last five years. Yet just as I did five years ago, I have also felt profound hope. Hope that out of deep division will surface genuine opportunities to dialogue meaningfully and act together across those very differences that have divided us.

At first blush, my hope may seem misplaced. Yet my time in the peacebuilding field and in the Communication discipline has given me reason to be hopeful. I have journeyed with West African everyday citizens from different ideologies and socio-economic and ethnic backgrounds and have watched them collaborate on political violence initiatives in Ghana, Liberia, and Nigeria and have impact. I have witnessed individuals who had never worked together before come together to collaborate on multi-year locally driven projects to prevent violence related to (1) elections, and (2) land, and (3) as a result of the Ebola virus and contribute to results  As a communication scholar and educator I have had the privilege of working with young people at Purdue University and all over the world who care deeply about social justice and working across divides to inspire meaningful lasting change. As a researcher, I have learned and analyzed the relationship between peacebuilding and communication in its many forms. All of these experiences give me hope that violence – whether it is physical or communicative – does not have to be the default response to “the great American divide.” In fact, productive communication and dialogue can be instead. In my experience, they have been, even when the odds are against them. But they take commitment, effort, and resilience to be become realities. 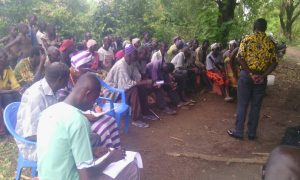 Since 2012, I have been actively engaged in the peacebuilding field. During that time, I have read, listened, observed, and discussed how to prevent political violence with peacebuilding colleagues all over the world – researchers, practitioners, donors, and everyday people from the Global North and the Global South. The lessons I have learned from them and from the empirical research that the Purdue Peace Project team members and I have done around each of our collaborative political violence prevention projects have shed light on what I have come to think of as the communicative constitution of peacebuilding. All who are reading this short piece right now have an appreciation for the various ways in which communication, broadly defined, is inextricably tied to, and I would say constitutes, peacebuilding. The Purdue Peace Project (PPP) team members and I proudly have centered the communicative constitution of peacebuilding in all of our collaborations. Our approach to working with everyday citizens on political violence prevention initiatives is grounded in relationship building, multi-stakeholder collaboration, dialogic principles, and democratic leadership, embracing local citizens’ desire to harness the communicative tools of their choice (e.g., social media, mass communication, interpersonal communication, drama) to articulate the importance of, and to enact the doing of, peacebuilding.

Indeed, in one paper published in the Journal of Applied Communication Research in 2017, PPP team members and I introduce what we have termed our Relationally Attentive Approach (RAA) to doing engaged scholarship. Four actionable values drive the RAA: engaging in ongoing co-construction; embracing reciprocity between choices made in engaged scholarship and impacts; inclusivity; and reflexivity. Contextualized initially within our multi-year peacebuilding work around a chieftaincy dispute in one Ghanaian community, the RAA captures how we tried to center relationships and attentiveness throughout our engaged collaborations while making particular communicative choices that align with our desire to live out the core tenets of engaged scholarship (i.e., co-construction with those with whom we as scholars are collaborating; striving for an equitable relationship amongst collaborators in which multiple knowledges are embraced and integrated into the collaboration). Those communicative choices are: (1) convening inclusively; (2) deferring; (3) supporting; and (4) validating. In making these communicative choices, we sought to democratize the notion of “expert” and not position experts as residing exclusively within the Western Ivory Tower of academia.  In so doing, we hope we have lived up to what we believe to be locally led peacebuilding.

I have learned much since our first engaged collaboration in 2012, often times through failures. Four specific lessons resonate especially with me as I reflect on this confluence of tensions and conflicts we are experiencing here in the United States. These lessons are:

Although I am hopeful, I am not unrealistic. Increased dialogue will not address all injustices. Structural change will not always follow from local action. Everyday citizens will not always step up to lead. But as Jessica and I wrote in 2016, “…our experience tells us that (re)building trust, creating opportunities for inclusive dialogue at the most local level, and inspiring meaningful locally-driven action is an approach our country [the United States] must consider.” I cannot help but wonder what the lived experiences of those living in the United States could be if many of us did just that and if we all entered into interactions with the RAA’s actionable values and communicative choices in mind. That constitutes a series of empirical questions for future engaged peacebuilding scholarship.